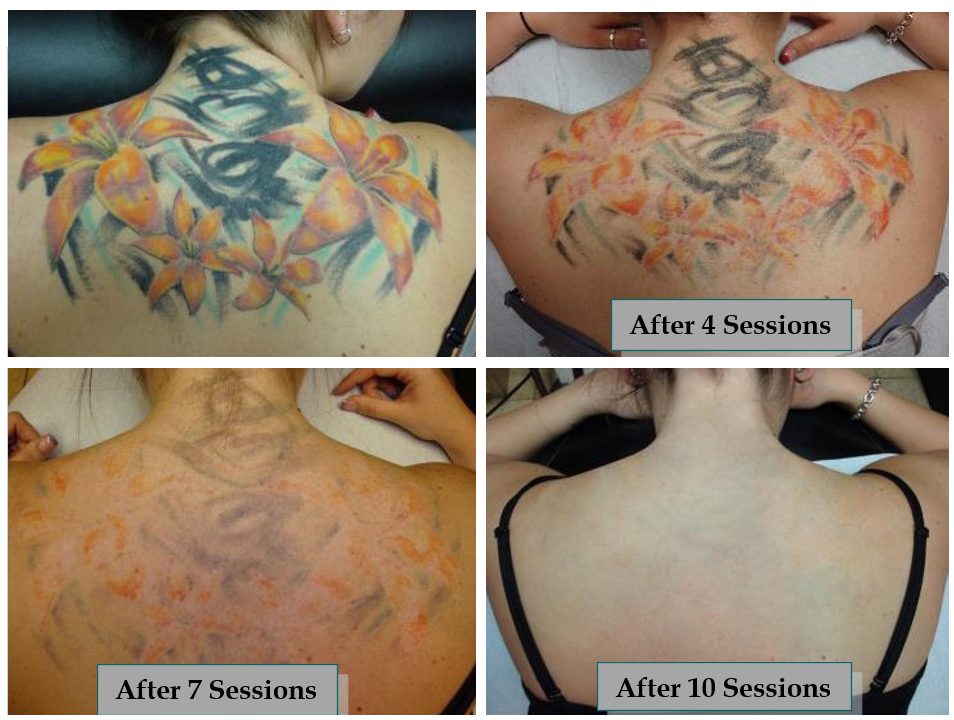 The first question everyone wants to know about potentially using lasers to remove unwanted tattoos is whether the procedure really works. In short, laser tattoo removal is the safest and most effective method for getting rid of that old ink available today. Because it uses only lasers, it is a relatively noninvasive treatment that targets only the ink of your unwanted tattoo and leaves the surrounding skin unaffected.

How Do Lasers Get Rid of a Tattoo?

In order to understand exactly how lasers are used to fade away those embarrassing tattoos from a previous life, we first need to take a moment to talk about what a tattoo is and how it leaves a permanent mark in the skin.

Archaeological evidence shows that tattooing has been a part of human cultures going back thousands of years. While the methods may have changed to incorporate high-tech electronic tools, the essence of tattooing has remained largely the same: using some sort of needle or other implement to implant pigmentation permanently into the skin.

While many people envision a modern tattoo artist using something akin to a needle and syringe to inject tattoo pigmentation in the skin, in fact, a tattoo needle is more similar to a fountain pen. The tattoo artist dips the tip of the tattoo needle into the ink, which then dangles from the tip as the needle is used to pierce the epidermis and dermis layers of the skin. A physical process known as capillary action then settles the ink into the dermis, meaning your skin actually sucks up the ink.

Interestingly, the ink is then kept in place permanently by the body’s own immune response. White blood cells, which rush to defend the body from the needle’s puncture, hold the ink in place. Research has only recently revealed that tattoos do not only produce the white blood cell response at the time of the initial tattooing. In fact, the body’s immune response is ongoing, with new immune cells continually showing up to protect the body but actually serving to hold the ink in place.

Lasers Break Up the Pigmentation

So how do lasers clear up unwanted tattoos? First, the process utilizes a specially designed laser that targets the ink but leaves the skin unphased. As the laser passes over the tattoo, it penetrates the skin, finding and fracturing the tattoo’s pigmentation. All the while, the laser has no effect on the surrounding skin.

However, the laser is able to break up the pigmentation into particles small enough that the body then is able to naturally flush them away via the lymphatic system, which is part of the body’s immune system. In some ways, the lymphatic system can be viewed as the body’s drainage system, helping to flush toxins, excess fluids, and other potentially harmful substances out of the body. Using a laser to remove unwanted tattoos engages the body’s natural processes for removing foreign materials to get rid of that old ink.

Not only does laser tattoo removal utilize the body’s own natural processes to help remove the ink, but it also kickstarts the process using nothing more than a highly concentrated beam of light that has literally no effect on the surrounding skin. As the body flushes away the ink particles broken up by the laser, the tattoo will fade away.

The Laser Targets the Ink but Ignores the Skin

One of the reasons that using a laser is the single safest method for removing unwanted tattoos is because it utilizes only a concentrated beam of light that has a dramatic effect on the ink particles embedded in the skin yet no effect whatsoever on the skin itself. This makes it a relatively noninvasive treatment as compared to other potential methods for trying to remove a tattoo.

While ink absorbs light–and therefore energy–at the laser’s spectrum, causing the ink particles to shatter into smaller pieces, the skin does not, leaving it completely unaffected even as the tattoo is obliterated, with the remnants naturally swept away by the body’s own processes.

No Needles or Knives: Just Light

Just as the name suggests, a laser treatment harnesses only the power of concentrated light with no need for needles, knives, or other such implements. We simply blast your unwanted ink with a powerful light, literally shattering the particles into smithereens. While this process is invisible to the naked eye, it will be apparent in its results as your tattoo fades further from sight with each treatment.

Will It Work on My Tattoo?

As with any cosmetic treatment, the effectiveness of using a laser to remove a tattoo will depend on individual circumstances. However, with the right treatment regimen, tattoos of all pigmentations and sizes can be removed with a laser. For example, certain colors or more dense tattoos may require multiple sessions, though results will be visible from the first treatment, with the unwanted tattoo beginning to fade away after just one visit.

What Colors Does Laser Tattoo Removal Work On?

Because the laser is essentially a very highly concentrated beam of light, it has a different impact on different pigmentations. Pigmentations that are brighter in color will reflect more of the laser light, making the laser less effective at breaking up the ink with pigmentations of that color. These colors tend to be in the fluorescent range and absorb relatively little light at the laser’s wavelength.

This does not mean that a laser cannot be used to remove tattoos in these colors, but it does mean that such colors may require additional treatments as compared to other pigmentations against which the laser is more effective.

How Many Sessions Does It Take?

Due to the differences among tattoos–including the colors and the density–there is no one-size-fits-all answer to the question of how many laser sessions it will take for your tattoo to completely disappear. However, any tattoo will begin to show signs of fading after just a single treatment.

For those with tattoos featuring darker pigmentations, it is likely to take fewer sessions than for those with fluorescent hues in their tattoos. As explained above, this is because darker pigmentations absorb more energy from the laser, making them more susceptible to the laser’s destructive effects. However, fluorescent colors absorb less and reflect back more of that light, meaning it takes more work to get them to break down.

Laser Removal Is a Process

Your now-unwanted tattoo did not magically appear instantly on its own, and removing it won’t happen by magic, either. Removing some tattoos can be a process involving multiple treatments and some patience, but rest assured that using a laser is the safest, least invasive, most effective way for you to finally get rid of that embarrassing ink.

Are you tired of choosing your wardrobe based on not wanting to reveal that embarrassing tattoo that somehow seemed like a good idea those many years ago? If you are truly dedicated to removing that unwanted ink, then a laser treatment might be the best option for you.

Where Do I Start?

Once you’ve decided that using laser treatment to remove your unwanted tattoo is the right move for you, where do you go from there? It’s important to find a trustworthy, experienced partner who can make your treatments go as smoothly and effectively as possible.

Go With the Pros

When you’re getting a tattoo removed, you want it done right. After all, the whole point is to make it appear as if the tattoo were never there in the first place. That’s why you’ll want to go with proven professionals who have the training, experience, and passion to do the best job possible for you.

At our clinic, our staff includes a doctor and multiple licensed estheticians and laser technicians. In addition to years of training and experience specifically in skincare, our dedicated and passionate staff also bring a host of other valuable professional and life experience to their practice, resulting in a unique and multifaceted approach to their work.

Other than a commitment to do what it takes to get rid of that pesky tattoo once and for all, there is not much that you need to do to prepare for a laser treatment to remove your tattoo. Because it is a safe, relatively noninvasive technique that targets the ink particles and ignores your skin, you might find the experience of removing your tattoo to be a much more pleasant experience than getting it was.

Laser Tattoo Removal Could Be the Right Choice for You

If you are as committed to getting rid of that old tattoo as you once were to getting it, then using laser treatment to remove your tattoo might be the best option for you. Proven to be safe and effective over years of use, laser treatments harness the power of concentrated light to shatter apart those unwanted ink particles, breaking them down into small enough sizes that the body can then flush them away naturally.

There’s no reason to live with the regret and embarrassment of an unwanted tattoo any longer. Quit wearing concealing outfits or having to fake-laugh your way through that same embarrassing story every time you put on your swimsuit. We all do things that we regret in life; unfortunately, some of those regrets are just more permanent–and visible–than others. Thankfully, if that mistake is an unwanted tattoo, laser treatment offers a solution.

If you’re tired of shuddering every time you think about someone seeing that embarrassing old tattoo from a different life; if you’re tired off trying to laugh off that same story of regret you wish you could just forget; if you no longer want to have that permanent reminder of the past, then contact us today and we’ll get you started down the path to a new you!